One of the skills taught in many critical thinking courses (and in my own textbook) is the use of diagrams to illustrate the components and logical “flow” of an argument.

The basic method I use is this:

Use a circle to represent your main point. Use squares to represent reasons supporting your point. And use arrows to show the flow of logic — to start at the reason you’re giving and to point at the conclusion it supports. 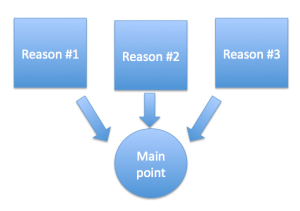 You can also read the diagram from the bottom-up. What’s your main point? What reasons are you offering to convince your audience?

You can of course take the reasoning a step further, and that can be reflected in your diagram. You can use additional squares to represent additional reasons, in the form of data or other evidence offered in support of your main reasons.

You can again read the diagram from the bottom-up. What’s your main point? Next: Why? What reasons are you offering to convince your audience? Still not sure? What further reasons (data or other evidence) are you offering in support of each of your reasons?

As a simplified example of this, imagine the following chain of reasoning:

You: “We should promote Michael to regional sales manager. He’s clearly the best candidate.”
Why?
“He’s a natural salesman. He’s got the leadership skills. And he’s a loyal employee.”
Really?
“Yes. His excellence as a salesman is clear from his numbers: he’s been our #1 sales rep for each of the last 5 quarters. And his leadership skill is clear from the way he has taken Ahmed under his wing to train him and coach him to achieve better sales. And the fact that he works late almost every day is evidence of his loyalty.”

If we mapped out the steps in that argument, it would look just like the right-hand parts of the diagram above: a main point, supported by a reason, which is in turn supported by further a further reason or evidence.

2 thoughts on “Using Diagrams to Illustrate Your Argument”

Chris MacDonald, Ph.D., is a philosopher and tenured Associate Professor at Ryerson University's Ted Rogers School of Management, in Toronto Canada. He is co-author of The Power of Critical Thinking, 3rd Canadian Edn.